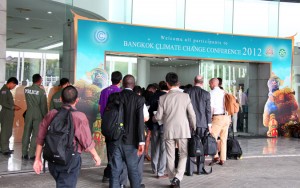 It has been nearly three years since I started following the climate change negotiations. I first attended the UN Climate Change Conference (UNFCCC) intersessional meeting in Barcelona organized just before Fifteenth Conference of Parties (COP15), a well-known Copenhagen climate summit. After that, I got selected as a Southern Capacity Building Fellow of CAN International for two years (2010 and 2011). Southern Capacity Building Program is more about strengthening capacity of civil society members from developing countries on climate change negotiation. I attended every COP and intersessions during 2010 and 2011 as a fellow.

After having some experience at the grassroots level and this short engagement in the UNFCCC process, I find it very challenging to link the expectations of communities with the progress of ongoing negotiations. Last week, after attending the Bangkok intersession, I faced a similar situation- having to update the communities within my country about the current state of negotiation. The Bangkok intersession was about exchanging of ideas on key issues to build on Durban decisions and finding ways to bring one of the Ad-hoc working groups to conclusion. This is not easy to convey to the grassroots people, who were waiting for action, not discussion.

Furthermore, the Bangkok session focused on how to raise ambition and strengthen international cooperation while finding ways to frame the Ad-hoc Working Group on Durban Platform (ADP) to deal with what will be implemented by 2020. Similarly, Ad-hoc Working Group-Kyoto Protocol (AWG-KP) and Ad-hoc Working Group – Long Term Action (LCA) were focused on fulfilling specific mandates from COP 17 and to resolve outstanding issues to ensure the successful completion of the group’s work in COP18. In reality, this makes little sense to the communities. END_OF_DOCUMENT_TOKEN_TO_BE_REPLACED

This article was published on MYREPUBLICA (31 July, 2012)

In a bid to promote clean technology in the country, Nepal has more than 700 electric vehicles (Safa tempos) running in the valley—a commendable effort to reduce its dependency on fossil fuels. Safa tempos are best driven for short distances and at relatively slow speeds, all of which suits the natural topography of Kathmandu valley. These green machines, which are mostly operated by women drivers, hold a lot of potential for the country’s economy and can tap Nepal’s massive hydropower potential to create a regional energy grid that contributes significantly in reducing GHG emission in the region. 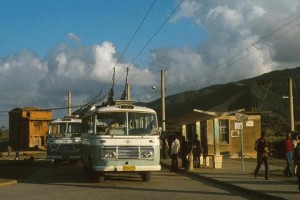 The interurban line (Trolley Bus Service) that connects Kathmandu to the satellite towns ceased its operation around November 2008. Established in 1975 and managed by the Nepal Trolley Bus Service (NTBS) of Nepal Transportation Corporation (NTC), the system functioned well in its early stages. At that time, this was one of the cheapest and most desirable modes of transport in the valley. With the change in political set up in the country in the 1990s, the management of the trolley bus service encountered hostile government bureaucracy and the organization’s overstaffing resulted in huge losses for NTBS. The revenue collected from fares was not enough to pay even the electricity bills or staff salaries. Currently, its office compound at Baneshwar is occupied by another implausible project, the Melamchi Water Supply. A part of its space is managed as battery charging station for Safa tempos, where they get uninterrupted electric supply even during load shedding.

THE BIRTH OF ELECTRIC VEHICLES

The advent of Safa Tempo’s in Kathmandu has replaced the notoriously environment unfriendly Vikram tempos that run on diesel. The development and promotion of Safa tempos in Nepal was initially supported through international projects. This later developed into a bigger EV industry with over 700 Safa tempos operating in more than 13 routes in Kathmandu. The journey was not as simple for other electric vehicles. When the first REVA car arrived in February 2001, it was bunged at the customs office for several months due to customs duty and additional special taxes. There are other similar stories for four and two wheeler electric vehicles that faced enormous challenges at all stages of import, registration and deployment to road and users.
Today, there are more than 700 three wheeler, approximately 1500 two wheeler and few four wheeler electric vehicles on our roads.

Even though, I regularly manage my emails, this afternoon unread emails counts 169 on my gmail account. This was the remarkable number that I have heard most of the time on workshops, interviews and discussions, along with abbreviation ILO, that makes ILO169.

I was curious about this issue from long ago, just 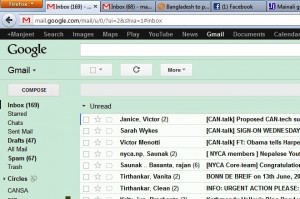 after the number strike my mind, I google it for further information. To my surprise, the first thing I noticed was, Nepal was only country to ratify ILO169 among eight south Asian countries and second countries among Asia-pacific. But I could not find the name of another country of Asia Pacific, which has ratified the convention before Nepal. [Why it was so important for Nepal?] Even though there are a lot of indigenous people in Myanmar, Bangladesh, Indonesia and Philippines haven’t ratified the Convention yet. The official website says that till date only 22 countries have ratified the convention1. [What about the DEVELOPED countries?]

In terms of using the Convention as a dialogue tool to stabilize the country, Bolivia and Guatemala in Latin America are ahead. The percentage of indigenous people in Bolivia is more than half the population, and it is said that the country has actually seen economic empowerment through ensuring indigenous rights. Guatemala is another Latin American country that has moved ahead2. Whereas, indigenous people accounts for 37.2 percent of total national population of Nepal (NEFIN)

The decrease in signatories can be partially attributed to Convention 169’s inclusion of Indigenous peoples’ right to self-determination. Many nation-states are apprehensive of such provisions, arguing that Indigenous autonomy undermines their own sovereignty and governance. Most of the nations that have ratified Convention 169 are in Latin America, where enforcement is weak. Three Non-signatories such as Canada and the United States cite the international community’s inability to enforce these international instruments among their reasons for refusing to ratify them3.

Convention 169 recognizes Indigenous peoples’ right to self-determination within a nation-state, while setting standards for national governments regarding Indigenous peoples’ economic, socio-cultural and political rights, including the right to a land base. The convention is law within the nation-states that have ratified it4. The government of Nepal ratified the convention on END_OF_DOCUMENT_TOKEN_TO_BE_REPLACED 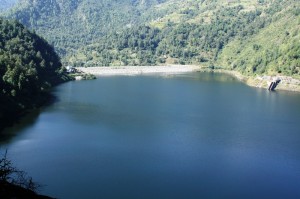 In the context of growing impacts of climate change on water bodies and hydrologic cycles, study on prospects of reservoir based hydropower in Nepal are highly desirable. Storing water in reservoir is one of the globally recommended options to tackle climate change impacts on END_OF_DOCUMENT_TOKEN_TO_BE_REPLACED

Collecting my own stories; it gives me great satisfaction. I guess, this is the one important thing that I have learn, a lesson to be satisfied.

Just to start with a famous quote of Mahatma Gandhi, “Earth provides enough to satisfy every man’s need, but not every man’s greed”. Similarly a British Prime Minister, Margret Thather once said, “Look at a day when you are supremely satisfied at the end. It’s not a day when you lounge around doing nothing; it’s when you’ve had everything to do, and you’ve done it.” For me this week was extremely busy, if I remember now every day I missed one commitment and all of them were the personnel commitments. I was unable join a weeding party of two of my classmate, I missed a deadline for scholarship for which I was keen to apply for and many more.

This evening I was googling quotes titled ‘satisfaction’ and found that a French author once said “A man who is always satisfied with himself is seldom so with others, and others as little pleased with him”. This jerks me to think once more and get back to those stories. I know and everyone knows that we do END_OF_DOCUMENT_TOKEN_TO_BE_REPLACED

It had been around 53 days, since I put in writing my earlier piece. And it has been the same 53 days, I was in shortage of cooking gas. Today afternoon, after I came back to my office after the meeting at Ministry of Environment, there was a call from the local gas dealer to be there by next 10-15 minutes to take gas cylinder that was booked for me.

Just a quick flash back of those dry days: many days I prepare breakfast and dinner at office, many days fry rice and momo were home packed, many times just forget or had no time for food and in between these many days I traveled in and outside Nepal.

I am indebted to Ugan dai for those all memorable moments at Delhi, Colombo and diner at Kathmandu. Similarly, I am very thankful to Sanjay and Srini for those beautiful moments and hospitality at Delhi and making arrangement to visit ‘Delhi Book fair’. Also, thanks to Krity and Dr. Sugathapal for taking your all valuable time and taking us for shopping, dinner and Colombo city tour. Oh how can I forget that dinner with Geeta, Thanks you very much- wish you a wonderful marriage life.

[Movies] So many movies, 2 times I went for ‘Loot’-a nepali record breaker and now also I am just back after watching ‘Kahaani’  a bollyhood thriller. Also there were two more late night hindi movies at Delhi. [Travel] There were also number of travel, started with Mahendranagar-far wet Nepal, Comombo – Srilanka, Delhi and Dhaka. Just forget about the expenses. [Books] Oh, now I have Bhagwatgita and Kuran, END_OF_DOCUMENT_TOKEN_TO_BE_REPLACED